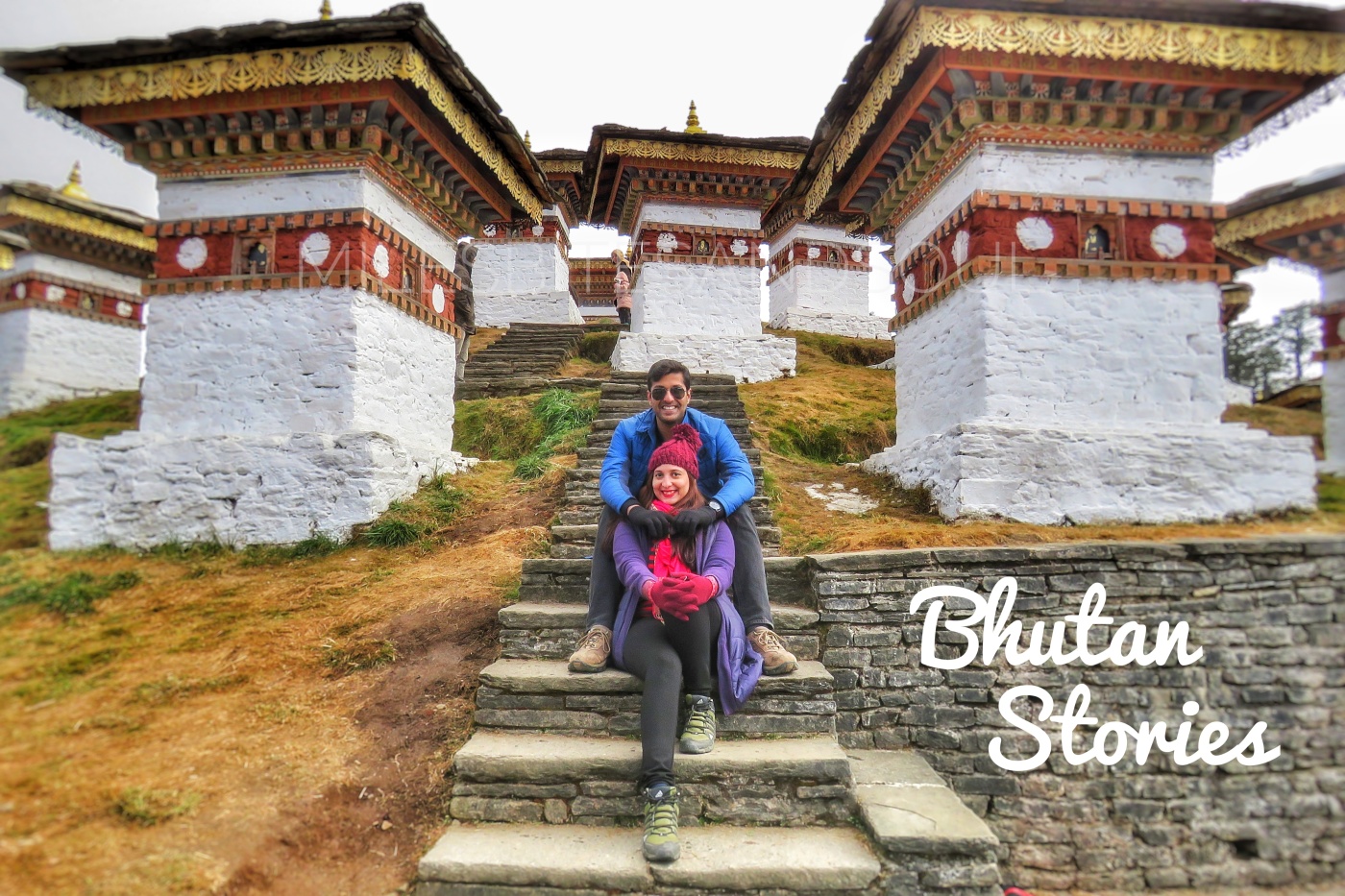 Travel Tips: Everything You Need To Plan Your Trip To Bhutan

A swig of Ara, A scoop of Ema Datshi and A Huge Dollop of Happiness!

Welcome to our stories from the Land of the Thunder Dragon!

Karma’s 6 year old son Ugyen was having a ball, flying paper planes with us all evening! At -10°C, with freely pouring, home brewed Ara to keep us warm, we huddled around the fireplace in the living room of Karma’s modest homestay in Bumthang. We were joined by a travel guide Jigme Wangchuk (who shares his name with a former king), our driver-cum-guide Sonam, and Karma herself. On that cold night, we shared a warmth that can scarcely be replaced. We spoke about our lands, our culture, politics and heritage and finally retired after a belly full of Sherab Dema’s (Karma’s mum) delicious home-made Bhutanese spread.

So how did we get to Karma’s house? Read on to find out!

In this three part series, we cover our journey through Bhutan, taking you to places and people from the east to the west of the country. Stay with us on this one and you will be rewarded with a unique perception of Bhutan.

We actually never planned for Bhutan, it was an impulsive decision to use up our pending holidays at the end of the year. So we decided why not head to our neighbouring, hilly paradise and kick-in the new year in a new country!

A general search will tell you that Bhutan comes from the words ‘Bhu-uttan’ meaning ‘high land‘. As we were planning the trip, we got curious about the origins of Bhutan. We realised how much we didn’t know about our bordering land except that it is a Buddhist country. That’s when we changed our trip duration from 6 to 10 days and decided to explore every corner of Bhutan.

With the early rising sun, we got our permits for the capital city and headed up the winding roads to Thimphu. From the first kilometer, we were hook, line & sinker for Bhutan. Windows rolled down, temperature dropping every half an hour & loosing network while gaining views. That summed up our drive to Thimphu. Without wasting time, we were off to the most iconic spot in the city, the Buddha statue.

By now, we are sure that the universe is on our side when we travel, ’cause more often than not, we get popular spots all to ourselves! Priceless views of arguably one of the most stunning capital cities in the world, golden hour painting shadows on the golden statue and freezing cold breeze. Bhutan had welcomed us with open arms.

We spent our evening at the local hangout, howling out our favourite rock songs to a live band performance of Bhutanese and classic rock.

Our original plans of staying on in Punakha had to be canned ’cause we couldn’t get a permit on time in Thimphu. Believe it or not, there were a barrage of tourists in the capital city and we had to wait our turn.

The next morning, we were out and about at 8 a.m. sharp, picked up our permits and drove out of town to beat the crowds and traffic.

It was a sunny winter morning and the crisp cold was actually enjoyable. On the way to Punakha, we stopped at Dochu La – a marvelous place of sanctity, covered in pristine white snow with small shrines scattered all over the sacred hillock.

Our excitement swelled at the start of our road journey through this beautiful country and as we drove through the mountain passes, we arrived at Punakha!

Punakha is famous for two reasons, the Punakha Suspension Bridge and the Punakha Dzong. The mighty Dzong is situated at the confluence of the rivers Mo Chhu and Pho Chhu (‘Chhu‘ means river in Bhutanese). The confluence of this being the Puna Tsong Chhu which actually flows into the Bramhaputra river in India. Sonam was super excited to show us Punakha Dzong. He promptly put on his Kabney (a scarf worn by the men denoting their rank or status) as he used to be in the army for a while and had a blue one denoting it.

Dzongs, Sonam explained were more than just monasteries. They are the administrative and religious centers of each Dzongkhag (district). They are sacred, hold government offices and have huge courtyards to host social functions.

But Punakha was just the first Dzong we visited, we had a few more gems to explore in the interiors of Bhutan.

Just 7 kms away and a short 10-min hike up is the marvel of Chimi Lhakhang (‘Lhakhang‘ means temple in Bhutanese), more popular as the fertility temple. Here, the Phallus is worshiped in all its glory!! So much so that you will also find paintings of them on the walls of houses and shops, miniatures atop the entry of houses and an open-minded way of life.

The stories attached to worshiping the Phallus by a more liberal sect of the Bhutanese Buddhists relates to a monk – Drukpa Kunley, who was of the opinion that being a staunch Buddhist doesn’t entail wearing specific clothing or abstinence from sexual life or intoxication. But, that’s a discussion for another post!

It was 8 p.m. in the east and the image of a Milky White Dzong stood out in the darkness. We stopped at the one and only tea cafe, just outside town. Gorged on sweet biscuits and Suja (Butter Tea) with views of the sparkly town. That was also the first night we tasted Bhutan’s famous Peach Wine (ZumZin) and we couldn’t get enough of it thereafter.

The rays entered our room and freshly brewed coffee beckoned! Mornings in the east are special I guess. We strolled into the market to stack for the day’s drive and snuck into a homely store for breakfast. Breakfast was super delicious. Rahul especially loved the minced beef preparation! (Bhutanese food is a host of variety. Don’t let the ema datshi references fool you!) The morning market was a peak into local life. One of the passersby caught us staring at a particular building on a height and offered to tell us the tale of the summer house of an erstwhile monarch.

Oh! But the stories of Bhutan are many and my words fall short…

Next on the map was Trongsa and the famous Trongsa Dzong. This was the first Dzong which we leisurely explored. It’s huge, a lot like a maze of white stairs connecting one building to another. Each turn will mesmerize you! We got caught up a lot with the paintings outside the monastery buildings and spell-binding valley views. The location of the Dzong is on a cliff and offers beautiful views no matter where you look.

Each Dzong or Lhakhang we visited, we kept gathering stories of Buddhist mythology from the lamas and Sonam. Tantric Buddhism is prevalent in most parts of Bhutan.

Trongsa is culturally, politically and historically important to Bhutan as Guru Rinpoche, the patron saint of Bhutan, is said to have brought Buddhism to the region from India via Tibet in the 8th Century. He is said to have had an important hand in uniting the individual kingdoms into a single country – Bhutan, at centrally located Trongsa.

Trongsa Watch Tower which is now converted into a Museum was where we got our dose of the origins, history, conquests, mythology and a lot more. It is a very modern and well thought out museum and being the travel nerds that we are, we enjoyed the influx of knowledge despite the captivating landscape of Trongsa!

While humming away 90’s Hindi songs playing on Sonam’s taxi radio, we noticed the landscape changing.

The houses were few and far between,
There were herds of heavily furred cows and horses grazing freely,
The river, was quiet,
The temperature, testing and
We, were hungry!

We were now in the eastern part of Bhutan – Bumthang, where even the locals are scarcely found. The biting chill in the air was in complete contrast to the warmth in our hearts. Were we, as many had claimed, witnessing Guru Rinpoche in the meadows of Kurjey Lhakhang? He is said to have left his body’s imprint in a cave there while meditating, to subdue an angry God. The lores of the Land of the Thunder Dragon were encapsulating us to a different level. We had to know more, so we drove a kilometre away to Jambey Lhakhang.

The old lama was spinning his prayer wheel and the prayer flags were flapping away in full gusto. Said to be one of the 108 sacred temples across Bhutan and Tibet, built by a Tibetan King to suppress a demon, Jambey Lhakhang has a twin temple in Paro – Kyichu Lhakhang. The Lhakhang was all ours to explore but for a beautifully dark blue bird. We were distracted by its beauty and Sonam was busy vlogging on his phone. Earlier in the year, this place played host to a festival and now, it was hiding secrets in its rooms. We were itching to ask if we could somehow access the hidden treasures locked in the basement of the temple.

But Some Treasures Should Never Be Found and Some Mysteries, Never Solved

We struggled through the fields trying to find Sherab Dema’s house. Round and round we went around the patches of muck and pebbles called roads. The night was falling and the chill was getting to us. We could no longer take it. So we walked. And just as we were about to give up, we found a local (God Bless Her!) who showed us the way to our homestay.

Kuzo Zangpo La!, greeted Ugyen and Karma…we could already see the steam rising from the cups of hot Suja.

Click here for Part 2 where we explore the highest pass of Bhutan, the Indian Army patrolled Haa Valley, conquer the mighty Tiger’s Nest and much more!