A point of interest for the NASA,

Birthplace of a scientific legend,

A pilgrimage site for many,

There are many stories that this Island holds. Some, more famous than the others.

Read to know all the stories we gathered on our trip!

(Check out Dhnushkodi, the Ghost Town of India bordering Sri Lanka by sea ) 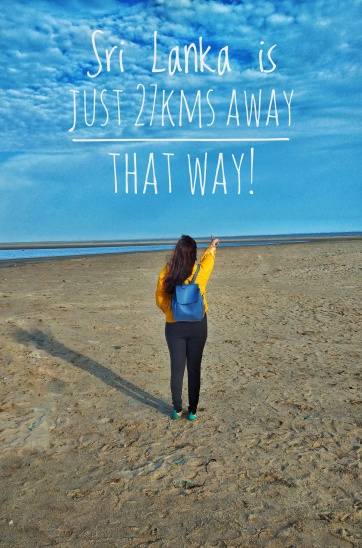 Land’s End, Beyond Which Lies Ram Sethu (or Adam’s Bridge)

Lord Rama’s wife, Goddess Sita was said to have been kidnapped by the Asura (Demon) King Ravana of Sri Lanka. In his quest to rescue his wife, Lord Rama along with his trusted Vanar sena (ape men) built a bridge across the sea from the tip of Rameshwaram island (Dhanushkodi) to Mannar island in Sri Lanka.

The mystery here was how a bridge of this magnitude was built, that too with stones that float. It is believed that Lord Rama pointed the tip of his bow and asked Lord Hanuman (King of the Vanars and his most faithful devotee) to build a bridge across the sea using rocks and stones. The stones with Lord Rama’s name inscribed on them would float to form the bridge. After a battle leading to the death of King Ravana, Lord Rama and Hanuman succeeded in bringing Goddess Sita back home.

Over time there have been numerous discussions, both scientific and spiritual on the existence of this ”man-made” bridge. However, NASA recently released a satellite image showing a bed of sunken reef shoals that seem to form a connecting bridge.

Former President of India and a great scientist Dr. A.P.J. Abdul Kalam was born in Rameshwaram. This is where he built the foundations of becoming India’s shining glory. It is only fitting that this was where his Memorial was made. Of all the things he contributed to the field of science and to our country overall, some are captured here in the form of life-sized wax statues, models of rockets, iconic paintings and pictures from his life.

His tomb is enshrined inside as well.

It truly is an experience to get a chance to delve into the life of a personality like him for us and for the future generations. And the Memorial is only fitting for him. 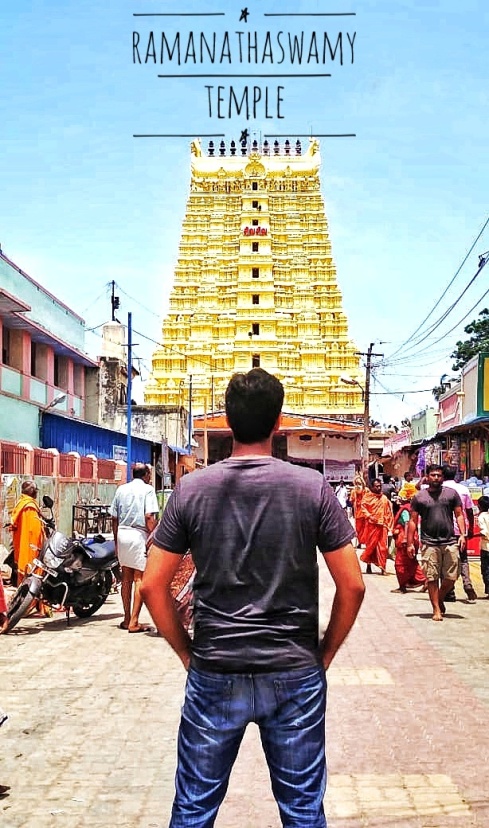 The stories behind this legendary temple and its architecture are truly captivating. It is a major pilgrimage site for Hindus and hence was very difficult to maintain all through the years. However, now with the effort of the government, locals and the courts, the roads are well furbished and the bathing area is separated. Based on the Hon’ble HC of Madras’ orders, the Agni Thirtham area is also kept as clean as possible. My advise to travelers who have heard otherwise or who have gone a few years ago is to definitely plan another visit soon.

Unfortunately though, photography is not permitted inside the temple. But a local guide will tell you the stories and myths behind the sculptures, paintings and the establishment of the temple itself.

Legend of the temple: According to mythology, after Lord Ram and Hanuman successfully rescued Godess Sita from the Asura King Ravana in Sri Lanka, this was where they stepped foot first in India. Some sages along the way advised them to install a Shivling. Not finding one, Lord Ram asked Hanuman to get one from Mount Kailash. Lord Hanuman managed to get 2! In the meanwhile, Godess Sita, had already created one from the wet sand of the beach. When Lord Hanuman arrived and saw this, he was miffed. It was then that Lord Ram assured him of a fitting temple for the two Shivlings. And that is how the Ramanathaswamy Temple was established.

It has one of the longest corridors among all Hindu temples. One of the corridors is lined with 108 Shivlings. Another one is an architectural and symmetrical marvel with a total of 1212 pillars, beautifully carved and maintained by regular paintings. Each sculpture has it’s own story to tell.

It is well worth a visit for any architecture & history buff. But also for the religious ones!

If you are not in the mood for some serious architecture, there are always beaches to relax on! Dhanushkodi is a magical beach to watch some glorious sunsets, play with the waves and take a long walk along clean shores.

There also some areas where you can enjoy water sports or try out snorkeling or even scuba diving!

Ariyaman or Kushi Beach is a great option for a fun family day! Plan a picnic or just a beach day building sand castles 🙂

A Train Ride on the Famed Pamban Rail Sea Bridge

Any write-up on Pamban Bridge will describe it as an engineering marvel. Withstanding high erosion and rough weather, maintenance of this bridge is a task for the local railway employees. But travelling on this bridge is a one-of-a-kind experience. So be sure to take time out and check for train timings from the nearest Mandapam Camp Railway station. If you’re travelling from Chennai or Madurai by train to Rameshwaram, you will definitely pass over the bridge.

Day 1: Arrive from Mumbai to Madurai.
Explore Madurai Meenakshi Temple and Thirumalai Nayacker Palace.
There are also options to shop for some beautiful sarees from the local market.
Stay overnight at Madurai
Or
Drive to Rameshwaram (3 hours)

Day 2: Explore the Ramanathaswamy Temple
Visit the Pamban Sea Rail Bridge View Point
Visit Dr. Abdul Kalam’s Memorial
Leave for Dhanushkodi (20 kms from Rameshwaram)
On the way you can also visit the Kothandaramaswamy Temple as a quick stop. (The Temple is said to have survived the catastrophic cyclone)

Note: The entry to Dhanushkodi stops at 5 p.m. and those already in, have to leave by 5:30 p.m. So make sure to be there on time to explore the ruins and enjoy the sunset.

You can add one more day to your trip.
Try out some of the best snorkeling/scuba diving experiences in Rameshwaram and spend the evening relaxing at the serene Ariyaman or Khushi Beach.

One thought on “Rameshwaram, An Island of Stories, A Sparkling Blue Gem”